Man Struck & Killed In Multi-Vehicle Crash on I-30 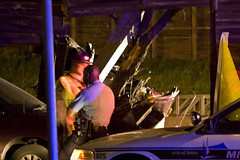 The aftermath of a car accident can be incredibly messy. More than just taking victims to the hospital and cleaning up the aftermath, it’s often difficult to know exactly what happened or who might have been to blame. It can become even more complicated when there are multiple cars involved in a crash.

Several people in Dallas are learning that fact firsthand after a very serious accident happened late one Friday night.

The crash took place on I-30 and started when a man who was driving a Honda Civic drove his vehicle into a retaining wall on the left hand side of the roadway. After crashing, he left his vehicle and walked into the westbound lane of the Interstate.  As he stepped onto the busy highway, he was struck by one, possibly two vehicles, and killed.

While a squad car was blocking off the scene of the accident, it was struck by a fourth car, making the crash even more catastrophic. Though there was only one casualty in the accident, there was a lot of property damage as well.

Without knowing exactly what happened, determining fault can come down to the knowledge and experience of a trained attorney who knows where to look and what experts to hire for a personal injury case. When anyone is a victim of an accident such as this has what they are entitled to. The court system can be an overbearing and complicated entity when you aren’t familiar with it.  Because it is easy to be intimidated in such situations, that makes it all the more important to have help that is experienced in representing a personal injury or accident lawsuit.

If you or someone you know has been injured in an accident, it is incredibly important that you can and schedule a consultation with one of the best Dallas attorneys in order to find out what they can do to keep you from being left out in the cold. Call for your free consultation today.