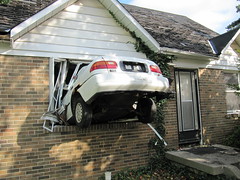 Car accidents happen all too often in Dallas.  Many times, however, they don’t even involve two cars. Property damage can be extremely expensive, putting many people into debt after an event that may not have even been their fault.

The owners of a home in Dallas in such a situation after a car crashed into their house.

The accident took place on Waco Avenue near the Dallas Zoo. Around 2:30 in the morning, a car was driving through the area when it passed first through a construction fence, then locking down city water pipes and hitting the home that was fortunately vacant at the time.

No one was injured in the crash, although the driver had to be taken to a detox facility. Police haven’t yet announced what charges that the driver could possibly be facing, but they did indicate that there will more than likely be more than one.

For the owners of the home, though, it isn’t over yet either. They will have to find a way to repair the damage that was done without paying out of pocket. Getting money from the person responsible isn’t an easy task in many cases, however.  It often requires a quality attorney to assist.

This is where having the power of a Dallas attorney behind you comes in.  Your personal injury or accident attorney specializes in these kinds of situations, and they will have the kind of knowledge and experience that means you won’t be left out in the cold. Call them today to find out what they can do for you, you’ll be surprised how much easier it is when you have someone there to fight on your side.